Ursula’s talk is based on her recent involvement in the Public Participation Process (PPP) which took place prior to the declaration of the Bo-Kaap Heritage Protection Overlay Zone.
Both the Cape Institute for Architecture (CIfA) and the Association of Professional Heritage Practitioners (APHP) participated in this process which was extensively covered in the press.

Ursula’s interest in the Bo-Kaap lies in its uniqueness of place which comes as a result of its history, its buildings, the architectural interventions and in the ways in which this space has been managed in the past, and possibilities for the future.

She will present a short history of the area, touching on events and developments that have influenced the Bo-Kaap. She will discuss the early days, the restoration activities undertaken by the City, the push and pull factors which influenced development and formal heritage protections along with the radical changes that have taken place along the edges where it abuts the City and the mountain reserve.

Some of the recent large scale developments in the area must form part of this discussion as these, coupled with protest by residents, have provided the catalyst to accelerate the formalisation of a process which manages all development in this area.
The City Guideline document states that “Despite some alterations and additions over time, the Bo-Kaap built form has maintained a relatively uniform scale and bulk (with a few exceptions) and the streetscape reads as a coherent whole.”

In reality – the Bo-Kaap has changed significantly over the past 60 years and this complicates its built form management. The declaration of the HPOZ is one potentially great step forward, but only if it is followed through with the next important process by which specific and objective guidelines, policies and rules are formulated. This must be done by means of surveying, assessing and identifying resource sites with the involvement of the community.

Ursula Rigby is a professional architect and heritage practitioner who lives and works in Oranjezicht Cape Town. She graduated in architecture at UCT in 1984 and completed an M. Phil in Conservation of the Built Environment in 2016. Her working career began in Revel Fox’s office, thereafter moving across the Atlantic Ocean to the Caribbean, to Johannesburg in the 1990’s and back to Cape Town in 2010.

Her M.Phil thesis title was Transforming Space and Significance – A Study of the Constitutional Court in SA. The study examined the transferring and transforming of significance in the built environment using the recognisably atypical Constitutional Court precinct in Johannesburg as a case. It explored the way in which society successfully sustains, maintains and even enhances cultural significance where radical modifications occur in the historic built environment

Through her involvement with the Cape Institute for Architecture and the Association of Professional Heritage Practitioners, Ursula participated in the public hearing about Heritage Protection in the Bo-Kaap which was arranged by the City and which took place prior to the recent declaration of the Heritage Protection Overlay Zone.

Unfortunately the June Outing to the Bo-Kaap did not take place. 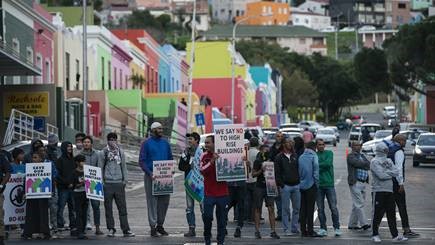