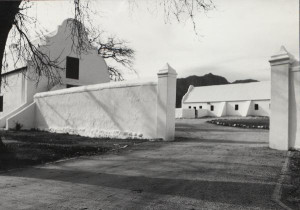 Take the N2 from Cape Town. Take Exit 33, the Baden Powell off-ramp, and turn left onto the R310 Baden Powell Drive. Proceed along Baden Powell Drive as far as the Zetler Farm Stall in Lyndoch and turn right into Annadale Road. At the R44 from Somerset West turn left and travel towards Stellenbosch.  Turn left into Van Rheede Rd, which is almost in Stellenbosch and, if travelling in the opposite direction, would be second traffic light from Dorp Street. Pass through the suburb of Die Boord and the security boom at the end of Van Rheede Rd. The road terminates in the Fleurbaix Estate. (See map at the end of the newsletter!)

The farm Fleurbaix, which adjoins Libertas, was granted in 1694 to the Huguenot, Pierre Le Fèbre, who was employed by the Dutch East India Company as a surgeon. He had arrived at the Cape in 1683. He named the farm after his birthplace, Fleurbaix, a town in the Artois district near Lille in northern France. The name was Dutchified to Fleurbaai but has now returned to its original form.

The outing will end at 12:00 and you will be able to picnic in the garden so bring your picnic baskets!

If however you prefer to go to a restaurant for lunch, Stellenbosch town centre is close to hand.

Our grateful thanks to Ivan Flint for offering to give the talk and lead the outing.

PLEASE REMEMBER TO WEAR YOUR VASSA BADGES!
OUTINGS ARE FOR PAID-UP MEMBERS OF VASSA ONLY!

A REMINDER: PHOTOGRAPHS ON OUTINGS

As you all know, we as vernacs get to see inside homes not ordinarily open to the public.  We have always refrained from making personal comments about decor or antiques, opening cupboard doors or entering rooms with closed doors, but it seems in the age of digital cameras, smartphones, facebook, twitter and other social media, we need to add another aspect to our etiquette.

So, on future Vernac outings, please note that although we may sometimes be allowed to take interior photos if we have permission, we should use them only for personal or research purposes.  It is suggested that details of interior architecture / fittings might be acceptable. However the property owner/occupant should be asked if they mind if any pics are put on the internet.

Never post images of a farm online with either GPS co-ordinates or the name and location/address attached as caption or other “tag” (such as the “check in” option on facebook).  We need to preserve the privacy of our hosts in this digital age! Of course, some already “public” exterior shots such as the gateposts or gables to illustrate your post to our VASSA facebook page after an outing are great.