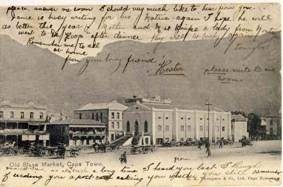 We will meet on Riebeeck Square on the corner of Shortmarket and Bree Street from where we will be looking at the historical fabric on and surrounding the square. This will give a valuable insight into the impact that the proposed development on Buitengracht will have on this precinct.
As part of our tour we will also be looking at the portion to the north of Riebeeck Square which is known as Heritage Square. This block was restored under the aegis of, amongst others, the late David van den Heever, an active member and former Chair of the Vernacs. 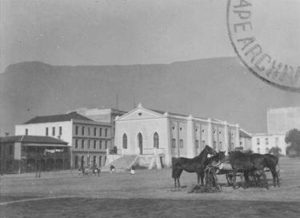 During the seventeenth century Cape Town expanded for the most part from the sea towards Table Mountain, along the axis of the Heerengracht or Adderley Street.
During the eighteenth century it began to fill Table Valley. This square was situated on the outermost street of the City, on Buitengracht Street. It was first known as “Boeren Plijn”, then as “Hottentot Plijn and finally as Riebeeck Square. These three names reflect the history of the square.

In the olden days the roads from the interior joined at a point somewhere east of the Castle and the wagons with their long spans of oxen all had to pass through a tollgate.
At first the farmers outspanned their wagons anywhere, but soon they had to be properly controlled.
They trekked past the Castle and up Sea Street (now Strand Street) to this large square, which thus acquired the name of “Boeren Plijn.

However, inroads were made on the Square during the first British occupation of the Cape. In the middle of the square on the Bree Street side stands South Africa’s first theatre, originally known as The African Theatre.
lt was designed by the architect Louis Thibault and built in 1801 by Sir George Yonge.
Lady Anne Barnard often visited this theatre.
Today it is a Dutch Reformed Church known as St. Stephens; the balcony and stage can still be seen.

Meanwhile the square lost its original function and name. In 1812 a new market was established immediately east of the Castle where the farmers now outspanned their wagons and conducted their business.
The “Boeren Plijn” gradually became known as Hottentot Square, a name, which appeared for the first time on a plan of Cape Town, prepared by Geo Thompson in 1827.

In the 1860’s it was re-named Riebeeck Square in honour of the Dutch commander of the VOC settlement of the Cape. By this time, too, it had become much smaller and, to prevent any further encroachments, it was proclaimed as a national monument on l7th February 1961.
(http://capetownhistory.com)