We will be welcomed by Trish Wood, whose family have owned the farm houses and immediate surrounding area for many years.  The original farm was once the major farm in the Fish Hoek Valley and extended across the valley.  25 years ago Trish decided to restore the main farm buildings.
Ivan Flint was the architect responsible and Ivan and Trish will present a show in the Voorkamer, of the photos taken at the time of the restoration.
After the main house exploration, we will visit 2 outbuildings, one restored and one waiting for Trish’s son to do so.Thereafter explore the perennial spring still flowing despite the lack of rain, and the graveyard.

Glencairn Watermill – A reconstruction of the mill 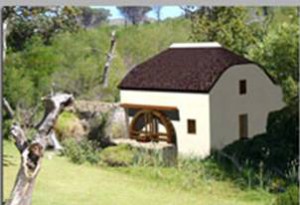 We meet our guide, Paul Jacques, in the second building, where Paul will share with us his research into the nearby watermill as well as  his informative computer reconstruction thereof. Thereafter we will walk to the nearby ruin of the mill. This will conclude the day’s outing. On your return journey the wetland is worth a visit and paths have been laid out. There is also the Hotel for those with parched throats or tired feet! 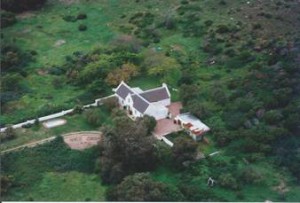 (The word poespas means a hodgepodge in Dutch). Sunnydale Farm (formerly Poespas Kraal) was one of four land grants made simultaneously in 1743. De Noordhoek, Slangenkop (Imhoff’s Gift) and De Goede Gift were granted to Christina Diemer and Poespas Kraal to George Wieser. Christina Diemer was the widow of Frederik Russouw of Zwaanswyk (Steenberg). The De Noordhoek grant is commemorated by a tiled mural on the old Noordhoek Post Office in Village Lane.

Poespas Kraal was 30 morgen [26 ha] in extent and was bought and developed by Johannes Bruins on 8 June 1759. Bruins (Andries Bruins’ father) is credited with having built the gabled homestead c1760 which is beautifully maintained and tucked away out of sight in today’s suburb of Capri. The former slave quarters was once a restaurant in which the original stonework was displayed. The homestead is one of four Provincial Heritage sites in Fish Hoek Valley.

In more recent times Sunnydale Farm was sub-divided into various lots and one lot-holder was Buller Louw who had a dairy herd, an abattoir and a road-side shop. Nicknamed Louw’s Corner, this famous shopping landmark was located at a point just short of the turn off to Noordhoek/Chapman’s Peak on the M64. Louw sold out to developers and the complex was demolished to make way for Sun Valley Mall in the 1980s and later Longbeach Mall.

BOOK ON THE HISTORY OF THE SOUTH PENINSULA
Mike Walker has just published a book on the history of the Families and Farms of the South Peninsula and the Cape Point Nature Reserve.
He includes the Poespaskraal hunting lodge and the Elsies River mill at Glencairn.
The book costs R170 (including postage). He can be contacted on 021 7881927 and coolarty@telkomsa.net