DIRECTIONS TO GET THERE:

We will be visitng the granite works which supplied granite to a number of important public buildings in Cape Town. The cutting of granite still follows an age-old tradition.

After the visit, which will last about an hour and a half, it is suggested that you could consider popping in at “De Poort” – the cart and wagon museum. It gives background history to the story of how the cart/ wagon business thrived in Paarl during the 19th and early 20th centuries (a bit like the Togryers in Ceres, but different).  It is very nearby to Clift’s (Clift’s made a donation of very nice granite cobbles to the museum). 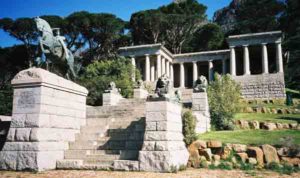 The intrinsic beauty of stone and the honesty of the craft of the stonemason can be traced through four generations of the Clift family. Founded in 1906 by James Andrew Clift of Cornish descent, the name J A Clift (Pty) Ltd has become synonymous with quality in the granite industry.

Very soon after James Andrew Clift started out on his own as “J.A. Clift Granite Works and Monumental Masons”, he was awarded the contract to cut and erect the granite work for the historic Rhodes Memorial in Cape Town. With the unprecedented growth of the company, it became necessary to acquire a new granite source. His search led him to the natural splendor of the Paarl valley, where the Clift family hired a quarry site on the De Hoop farm. J.A. Clift Granite Works grew in stature and it was decided in 1939 to form a privately held company – leading to the formation of J.A. Clift (Pty) Ltd, Granite & Marble Contractors and Monumental Masons. Many historical contracts followed, including the Australian Mutual Building, the Old Mutual, the General Post Office, the parliament and the Franschhoek Huguenot memorial.

James Andrew Clift was born on 17 October 1868 in Mousehole, a small fishing village on Mounts Bay near Penzance. The town’s granite cottages and granite pier, built in 1870 by the local quarry owners, reflect the overall availability of granite as a building stone.
James Andrew was the second youngest son of John Andrew and Elizabeth Matthews Clift. In 1895 James Andrew moved to Cape Town and was working at the Higgo Quarry in Kloof Neck. At the time the quarry employed as many as 120 masons.
Cape Town was growing rapidly and with an ever increasing demand for more buildings, ample work for the city’s stonemasons. James Andrew decided to settle permanently at the Cape and in 1896 he sent for his family. A few months later his wife Caroline, now 28 years old, arrived in Cape Town with their two children: John Andrew (6) and Linda (5). The following year a second son Karl was born.

1899 saw the outbreak of the South African War, and James Andrew, unwilling to be caught up in the war in a foreign country, booked a passage for his young family back to Cornwall.

In 1906 James Andrew begins a correspondence Bellevue Quarry regarding a supply of granite for the Rhodes Memorial. In a letter dated 13th March 1906 they agree to a total order of 26,000 cubic feet of granite to be delivered at a rate of 2,000 cubic feet a month to the top of Kloof Street.

The granite used in the Rhodes Memorial is not “Paarl Grey”, but a coarse grained granite similar to that quarried at the Higgo Quarry. Dr Doug Cole, writer of “Building Stones of Cape Town” believes that the Bellevue Quarry lay a little further down the slopes of Table Mountain, closer to the city, in the vicinity of the present day Bellevue Street.

To lift the heavy granite blocks that would be required to build the memorial’s granite temple, steps and terraces, James Andrew imported a new wooden crane. Stoltenhoff’s first delivery of granite from the Belllevue quarry was paid on 19th May 1906. That same month, in conjunction with the money forwarded by McKillop to finance the work, he also received money from the Corporation of the City of Cape Town for granite spawls he had sold to them, and from Salt River Cement Works for granite chips. The spawls would have been used to rework for pavements and kerbstone, while granite chips would be used as cement aggregate.

All information on the company from their website: www.cliftgranite.co.za