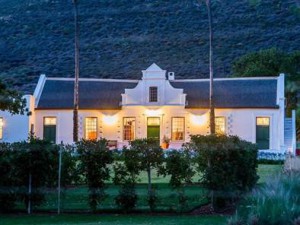 Toontjiesrivier is a late thatched house in the Nuy Valley which has a fine four-pilaster Worcester-type gable with concave wings. It dates from c1840 and has a long seven bay façade with buitekamer doors on either end. Unlike most of the Breede River houses of the same date it is not two rooms deep but is T-shaped with the kitchen at the tail of the T. All openings on the main façade have quoined architraves and there is an outbuilding alongside that dates from the same time as the main house. (Info from Hans Fransen (2004) A guide to the Old Buildings of the Cape)

The house has been restored and is now a guest house. Although we will be visiting the area in October during the weekend away, we will not be visiting this house so the talk will give a good insight into one of the interesting farms in the area.

Julian Kritzinger is a heritage consultant based in Worcester who has been involved in researching the history of the house. Perhaps he might even dispel the rumours as to the origin of the name of the farm!