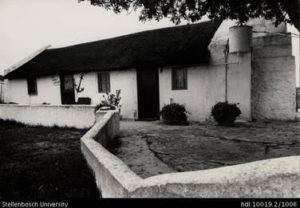 Houses are small and roadways are narrow, with limited parking, therefore the number of members on this outing is limited to 20. If you would like to go please email: Pat Kramer: studio@iafrica.com to put your name on the list.

Entry fee to the park is R54 plus R80 conservation fee.  This is the fee for South Africans – bring your ID BOOK.

We will walk from Jane Prinsloo’s house in Stofbergsfontein down to the beach; then walk along the beach to see the lagoon-view of the village  and along to the north end of the village.  We will then walk back through the village, visiting the little community museum and one of the traditional fishing cottages along the way.  From there we’ll walk back to Jane’s cottage wher we’ll have our picnic lunches.

The walk would take about 2 1/2 hours.  A visit to the Church and cemetery would be another 20 minutes

After lunch you will be free to explore the park, maybe drive to Geelbek to see the house or have a coffee.

A new Journal and Report will be available at the VASSA talk and outing in November.  Cash sales at the events. EFT by arrangement through publications@vassa.org.za.

A brief history of the development of Barrydale, by Stephen Dugmore

This article was originally a paper written in 1991 as part of the requirement for the degree of Bachelor of Architecture at the University of Cape Town (UCT). It is a brief history of the development of Barrydale in town planning and architectural terms. A number of possible reasons for Barrydale’s formation are discussed, as well as an attempt to explain why Barrydale looks and functions the way that it does. An emphasis is placed on the early development of the town as it is the author’s contention that it is there that the answers will be found.

The historical context of the T-shaped house at Elandsberg in the Roggeveld, by Judy Maguire.

Elandsberg is an old farm on the banks of the Riet River east of Sutherland, situated on the 18th century route into the interior. On it stand the ruins of an old settlement, amongst which is the ruin of a stone-built T-shaped house which was the focus of a survey by a VASSA Historical Survey Group during 2016 (Amschwand 2016). … The evocative nature of decaying hardebies thatch sliding from broken trusses, the verbrakte gardens, abandoned kraals, ash heaps with bleached bone splinters, weathered shards of glass and ceramics and the trampled-out werf, suggest a human story which is not captured in the usual documentation.